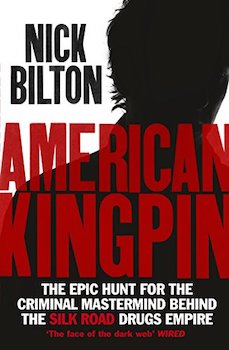 I originally saw this book recommended in Kevin Kelly’s Recomendo newsletter where they recommend 6 new things each week. I’m a big fan of Kevin Kelly, I really enjoyed his epsisodes of the Tim Ferris podcast and the Sam Harris Waking Up podcast where they discus AI. His Cool Tools book is massive and great as is the Cool Tools podcast. He’s one of the few people who is described as a futurist who isn’t a massive toser like Shingy. Therefore a recommendation from him carries a lot of weight.

The book tells the story of Ross Ulbricht who created the Silk Road, an “Amazon for drugs” where people could use Bitcon to buy drugs on the dark web. It starts with his early college years with him getting into libertarianism in college. Ross launches the Silk Road with the rationale that government shouldn’t be able to tell people what drugs they should be able to put into their bodies. The book depicts him as being a likable at a times naive character, as the site grows into a billion-dollar online drug empire he morphs into his Dread Pirate Roberts online persona, the captain of the Silk road, making ruthless decisions including selling firearms and heroin through the site and paying to have people killed.

The books is a page turner, especially as the hunt intensifies to catch the criminal mastermind behind the Silk Road. It raise questions on interesting topics; leadership, how much we should stick to our ideals, the desire to leave a lasting legacy. Ross was caught for creating and running the silk road and is currently serving life in prison.

I’d definitely recommend it, they are definitely parallels between the creation of the Silk road and launching a tech start-up, in a way it reminded me of The Everything Store, the book about Amazon and Jeff Bezos. As a side note I read American Kingpin on a Kindle to keep Jeff Bezos happy.